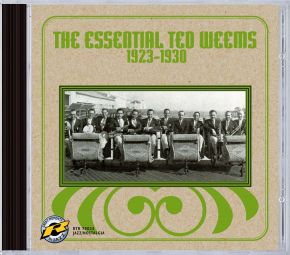 "In the 1920s, Ted Weems' orchestra was the definitive dance band, performing everything with a strong jazz flavor and concise solos, yet always being melodic and accessible to a wider audience. This two-CD set expertly sums up Weems' prime jazz period, starting with his 1923 hit version of 'Somebody Stole My Gal' followed by nine songs from 1924-1925. The band really found its sound in 1926, and the second disc covers Weems' peak period of 1928-1930. Along the way are such songs as 'Big Boy,' 'Siberia,' 'She's Got 'It',' 'Miss Annabelle Lee,' 'What a Day' (a gem), the hit 'Piccolo Pete' [and more]."

"...excellent transfers by Harry Coster... quality of the solos is surprisingly good... must have"
Vintage Jazz Mart