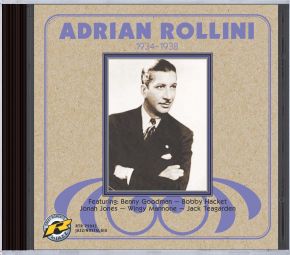 A chronological set of Rollini's recording groups from the years 1934-1937, featuring such top-flight names as Benny Goodman,Wingy Mannone, Jack Teagarden and Jonah Jones plus vocalists Red McKenzie and Ella Logan and including two rare tracks taken from radio broadcasts.
Under-appreciated for many years, Rollini's reputation has been growing steadily during the last decade.We intend to issue a second CD covering his later recordings.This one contains fine swinging music and includes several recognised classic tracks e.g. 'Davenport Blues' and 'Riverboat Shuffle'.