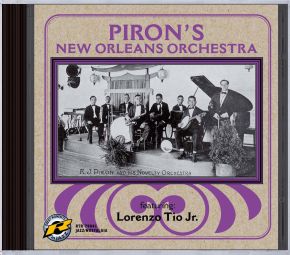 The complete recordings of a black New Orleans band which had been a regular functioning unit of the highest musical standards in a restaurant on the outskirts of New Orleans.Recorded both during a New York visit and at their very base in New Orleans.
The complete recorded output of a genuine New Orleans Orchestra is quite unique.This CD issue has added two sides by Ida G.Brown to the recordings originally issued on Retrieval LP as research done since indicates that they are accompanied by members of the Piron Orchestra.This is the utmost opportunity to hear the authentic legendary New Orleans Sound at its very source.Lorenzo Tio was of great influence to Jimmy Noone,Albert Nicholas and many other New Orleans clarinettists.