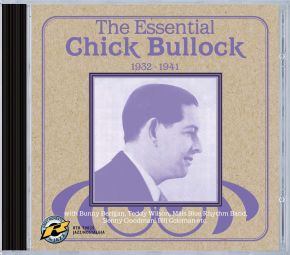 No one would call Chick Bullock a jazz singer. A popular singer who was comfortable with and often received jazz accompariments would be a better description. One of the most prolific recording artists of the 1930's with several hundred titles to his credit, little was known about his life outside the studios and no one ever seemed to have seen a photograph of him. The authorative notes here are by the late Peter Tanner, who knew well in his later years and also came up with photographs. The accompaniments include such stalwarts of jazz as Bunny Berigan, Teddy Wilson, Benny Goodman, Bill Coleman and Mills Blue Rhythm Band. No wonder Chick's output is eagerly sought after by jazz collectors. Transfers by John R.T. Davies, Bullock is defenitely one of the more Ôlistenable' singers of the 1930's and this CD is highly recommended not only to those who know his work but also those who just like good singers and accomparists.

"Excellent selection of titles... liner notes tell us far far more about the man than I have ever seen in print before... highly recommended"
Penguin Guide to Jazz on CD