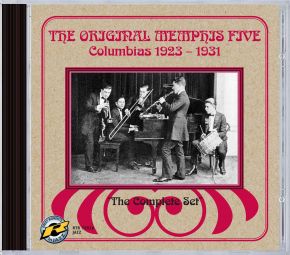 One of the seminal and highly influential bands of the first half of the 1920's, the Original Memphis Five based itself initially on the style of the pioneer's Original Dixieland Jazz Band, but soon developed a much looser approach, which became hugely popluar through the several hundreds of recordings they made (they were shrewd enough to stay free-lancers) for just about every major record company (and some minor ones) in the U.S.A. Phil Napoleon, Jimmy Lytell and Frank Signorelli all began their long and illustrious careers with the Original Memphis Five. But best remembered is the first great trombone virtuoso in jazz history, Miff Mole, soon to join with 'Red' Nichols in a ground-breaking partnership that largely dominated jazz in the later 20's. The Original Memphis Five have been poorly served on reissue. this CD contains a complete set of their Columbia recordings (See also RTR79044 for their Pathë's). The 'Peguin Guide to Jazz on CD' says "excellent transfers - an entertaining piece of jazz history"

"Re-mastering is excellent and this CD is well worth putting on your buying list. Recommended"
Vintage Jazz Mart