The code is valid one time and valid for a 10 days after receiving the promotioncode. Your emailaddress will only be used by Challenge Records International and will not be given to 3rd party advertisers. If you have any questions please contact us.
TITEL CD is added to your cart.
11 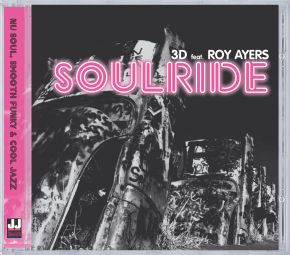 3D is a souljazz-formation from England, with keyboard / trumpet-player and producer Josef and DJ/Producer Andy Madhatter. They have been working together on various musical projects for more than five years. Besides that, the have separately contributed to recordings of British soul acts like Mr. Scruff, Aim and Only Child. Josef has performed with Nightmares on Wax and Madhatter has been involved in Club DJ'ing around N.W. England having hosted numerous Black Music Radio Shows including currently BBC Radio Lancashire. A more recent and very successful project by the duo Josef and Madhatter, was Marvin Gaye "Music-Feel The Soul", which got the highest airplays in clubs and radio in England over last 12 months. 3D's current album started from sessions put together for ex Kleeer vocalist Woody Cunningham (whose "Universal Love" CD they produced - Madhatter having previously worked on Woody's first solo album "Never Say Never"). Roy Ayers, one of the finest jazz vibraphonists was in the country gigging at the time and 3D brought him up to Manchester to record "Rocking You Eternally". Andy Madhatter had previously worked with Roy Ayers on another remix project. The other featured vocalist Bobbi Depasios ("Set You Free") previously worked with dance group K Klass, having sung on their hits a.o."Rhythm Is A Mystery". The other musicians in the group are collegues of Josef from Manchester's live/studio scene.