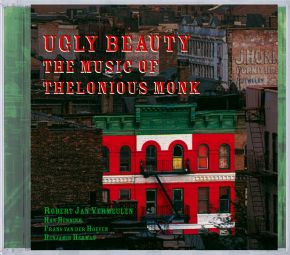 The Music Of Thelonious Monk

During the last few years Dutch pianist Robert Jan Vermeulen had become fascinated by Thelonious Monk's compositions. When Daybreak invited him to record another album in the 'En Blanc Et Noir'series, he pointed out that he'd rather do a separate album exclusively devoted to Monk's music. This resulted in 'Ugly Beauty', which in all modesty, we believe to be a major achievement in the jazz scene in The Netherlands. The musicians Robert Jan selected to join him for this tribute CD, are among the best of Dutch jazz artists, who have also proven their musical qualities outside The Netherlands.We are very proud that the 'legendary' drummer Han Bennink was willing to participate in this project. He really stirs up the place. The much in demand bassplayer Frans van der Hoeven made with this recording already his fourth CD for the Daybreak label.Saxophonist Benjamin Herman has made various albums as a leader for Challenge's sublabel A-Records.Famous for his tributes to Misha Mengelberg and Jaki Byard (feat.Pierre Christophe), he is also known for his crossover big band The New Cool Collective, that has gained considerable popularity all over Europe.