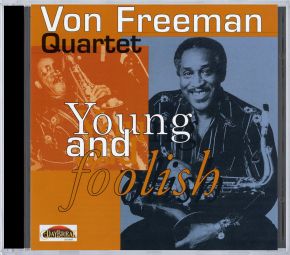 Von Freeman: tenorsaxophone | John Young: piano | David Shipp: bass | Charles Walton: drums Central to Mr. Freeman's conception are a sense of form that would have been familiar to such as Coleman Hawkins and Lester Young, together with the blues, that dramatic colorant of all the best improvisers' work. From such sturdy foundations, Mr Freeman generates an articulate stream of ideas, potently swinging and dramatically punctuated. His tone is strikingly varied, from the rich and dark, most traditional sonority, to sounds that are almost eccentrically vocal, but always highly expressive.
Matters of tonality are particularly crucial to Mr Freeman, because, in matters of pitch, his approach is as radical as Ornette Coleman's. But it is tied to more traditional, albeit elastic rhythmic values, so much so that Mr Freeman was 'free-bopping' long before the players of the post-Coleman movement returned 'inside'.
Indeed, he moved in the 1960s from associations with such as Milt Trenier to founder figures of the AACM like his friend, tenor saxophonist Fred Anderson, his one-time pianist Muhal Richard Abrams and the bassist Malachi Favors (who had been on his first recordings in 1952). Like Thelonious Monk with the boppers, Mr Freeman was comfortable with such men, his playing suitably adventurous, but undeniably and individually different.
(from liner notes by Chris Sheridan)