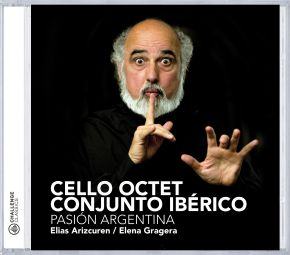 Ginastera (Buenos Aires) was married to a cellist, his inspiration to write numerous works for cello. He is a true master in integrating the folk-music of his country into his works, that show a great variety: symphonic music, chamber-music, ballet, opera, songs, choirmusic. Pampeana no. 2 (1950), a rhapsody for cello, inspired by the Argentinean pampa is an exuberant piece, full of virtuosity. In this version for cello-octet two soloists engage in a lively discussion.

Ballet Estancia (1941, about Argentinean country life: "Estancia" is a type of ranch on the vast, grassy Argentinean pampas) was commissioned by the American Ballet "The Caravan", to be choreographed by Balanchine. The American Ballet, however, was suddenly disbanded and in 1943 Ginastera turned it into a concert-suite.

Guastavino (Santa Fé) studied chemistry and music in Buenos Aires and in Europe. He composed a.o. songs, piano-works, a violin-sonata, orchestral works, the ballet "Once Upon A Time" and the "Suite Argentina". His style is derived from the typically Argentinean rhythmic and melodies.

Piazzolla (Buenos Aires) studied music in the United States, Buenos Aires and Europe. His vivacious style ('nuevo tango') attracted a massive South American audience (and opposition from tango traditionalists). A controversy ran on whether his music was tango or not, and it got to such a stage that Astor Piazzolla had to define it as "contemporary Buenos Aires music".