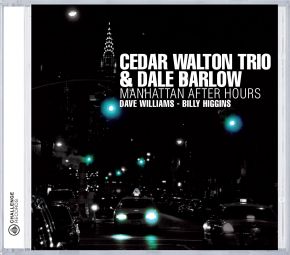 Cedar Walton: piano | Dale Barlow: tenor sax | Dave Williams: bass | Billy Higgins: drums. Pianist Cedar Walton and tenor-saxophonist Dale Barlow have played together on numerous occasions since the late 1980s. The combination works quite well because Barlow's style is complementary to Walton’s and the tenor's presence gives the pianist an opportunity not only to be a leader and a soloist but to show off his talents as an accompanist too. Both are masters of modern straight ahead jazz, influenced by the innovations of the bebop generation while finding their own voice in jazz's mainstream. And although born nearly 27 years apart, they speak the same musical language and have no difficulty communicating with and inspiring each other.
While it usually takes pop acts months and even years to come up with a final CD and jazz groups frequently take two or three days, the Cedar Walton Quartet recorded this entire project during a single day, Nov.15, 2000. Manhattan After Hours consists of seven veteran standards plus two of Dale Barlow's originals. But - despite how vintage many of the songs are - Cedar Walton, Dale Barlow, David Williams and Billy Higgins had no difficulty coming up with fresh statements and variations, making new music out of older vehicles. That is why these songs are standards, for they can be interpreted endlessly by creative musicians and still sound new and relevant.