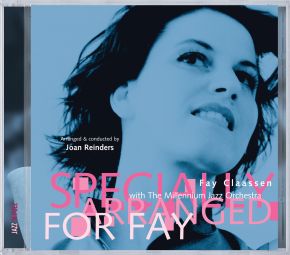 Fay Claassen: vocals | Joan Reinders: conductor, arranger |
Willy van Diepen, Gerard Grobben, Gerlo Hesselink, Martin van der Horst, Job Helmers: saxophone, clarinet |
Rini Swinkels, Jan Wessels, Bert Fransen, Erik Hilferink,
Herman Nijkamp
: trumpet, flugelhorn | Jeroen Rol, Henri Gerrits, Gert Nijenbanning, Eric Westerink: trombone |
Hans Kwakkernaat: piano | Bart Tarenskeen: bass |
Niek van Wiggen: drums
“Singing with a big band grabbed my imagination early on. It is difficult for me to put into words how great it is when a big band is “carrying” you, especially when you also feel bound up in an intense exchange. The first time I really experienced that combination of feelings was during a performance with The Millennium Jazz Orchestra. Contact developed with Joan
from that first time and the idea was also conceived to lay down that shared sensation on a CD. I would never have dared dream that his arrangements would turn out to be so special.
He must have been totally able to put himself in my place. In any case, he managed to give me the right musical inspiration, because in all of these arrangements he has given me the freedom to really enjoy myself.”