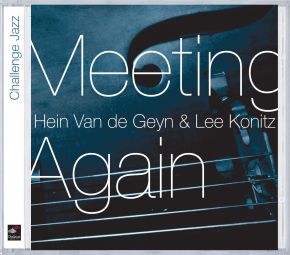 It is 1990 and after ten years of answering the phone I really felt the need to make a more personal musical statement. I had two things in mind: a trio with the guitar player I played with in the early eighties when living in San Francisco: John Abercrombie or: a duo with one of the great improvisers of the music: Lee Konitz. When the label of my friend and pianist Jack van Poll offered me the chance to record, it was he who made the choice, the scariest choice, the most exposed scenario: a duo with Lee. With shaking knees I telephoned to New York and after some communications Lee agreed to come over, play some concerts and record.
In the spring of 1990 we met at the airport and spent a wonderful week together, playing concerts in Holland, Belgium and France. After that we went into the studio and made a recording for September Records. It was not an easy session, to capture the magic of the life performance in the studio was tough and in the end we only had some 35 minutes of music. I went back in the morning, after I had brought Lee to the airport, and recorded a string of short bass solo pieces. They formed the leitmotif for the recording, and these small bass miniatures have stayed with me all these years. But more important: this man stayed with me. I will never forget the musical adventures he took me on, the fact that at some point we were singing Body and Soul together in a club in Paris; the car trips where we would be scatting, trading phrases ... Lee's looks when I would sing a lick (!)...... I learned so much, experienced so much. ("Keep playing as beautiful as you are" is what Lee wrote me after the tour; it was an inspiring phrase).
Now 16 years later Lidwien Vork, owner of the Beauforthuis, invited me to organize three concerts during the season 2005/2006. What was more logical than to ask Lee to come and join me for one of these. This venue, a lovely church turned into an attractive small theater, was part of our tour in 1990 so all fell in place. Two men, 16 years older, met again and decided not to talk about the music beforehand. Lee just expressed that he was fond of changing tempo's and changing tonalities freely, was that OK for me? Of course! So we went on stage and just played. There were some songs, some improvisations, there was some solo playing and we finished with an encore fitting the hour of the day.
The music is nothing more than the musical meeting of two players that like each other, that search to communicate, that remain close to their individuality at the same time. Flashiness, complicated harmonies, tight arrangements are not to be found. What you hear are two musicians leaving space, being vulnerable, listening intensely; you hear surprise, you hear true communication, you hear love: love for people, love for the instrument, love for music. Thank you Lee, again it was an inspiring experience. Hein van de Geyn (liner notes).