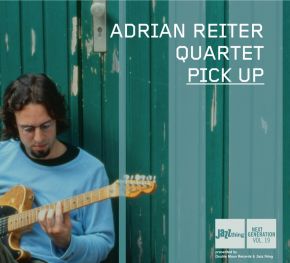 When four young men around 30 meet, who have each already played with many big names, including international ones, a very solid band can develop in a short time. But the Adrian Reiter Quartet is not only solid, but also has optimum enthusiasm and imagination, so that you can really get dizzy listening to them.
The leader spent a few years in New York to pursue studies under Mike Stern, Jack Wilkins and Vic Juris, among others, at New School. The result sounds „as if Wes Montgomery and John Scofield had done something together“ according to the program of the renowned Palatia Jazz Festival, where Reiter had the unique chance to present his CD before Curtis Stigers to a large audience. But Reiter’s guitar playing goes beyond these legends and has found its own language. This can be detected not only in the fact that all pieces on the CD were composed by him. Ballads, groovy funk tunes and daring up-tempo pieces alternate and do not allow one second of boredom.