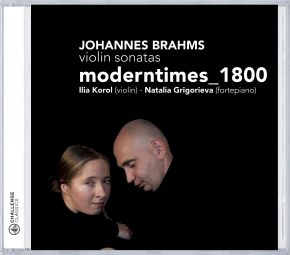 Articulation and balance in this recording were developed from the way the instruments were handled. Ilia Korol plays a violin of Cai von Stietencron in the traditional style of Cremona, Italy; however, it features ‘modernisations’ of the kind that were usual in the period of Brahms. In other words the neck, bass-bar, finger board and bridge were altered to achieve a more brilliant, powerful tone. But in Vienna gut strings were still being used; this recording follows suit.

Natalia Grigorieva plays a Streicher grand piano of 1870, one which is probably very close to the instrument that in 1868 Brahms received as a present from the firm of Streicher for his flat in Vienna. The bass is powerful, very sonorous, rich in overtones and never muffled; the high notes are clear and focussed, without being pointed.

The piano plays the role as an equal partner with the violin, so that one sometimes gains the impression of listening to an animated conversation between friends, as in the first movement of the G major Sonata: at the opening the piano lays the harmonic foundation for the violin’s melody; then it blends itself in, at first cautiously, then more forthrightly, enlivens the theme, argues, interrupts the violin either in agreement or in contradiction, disputes with it, makes up with it, before the two instruments together come to a conclusion.

Brahms wrote his Violin Sonata in G, op. 78, in Bonn in 1878-9. After a well disposed, lively Vivace ma non troppo the mood is reversed in a serious Adagio. In the third movement Brahms quotes from Regenlied op. 59 no. 3 (text by Klaus Groth), written a few years before.

The earliest sketches of the A major Sonata op. 100 date from the summer of 1883, while he worked on the Third Symphony. Brahms himself pointed out that in the first movement motives from his Lieder can be found, above all Wie Melodien zieht es mir, op. 105 no. 1; it can no longer be established which was written first, the Lied or the Sonata.

The Sonata in d minor op. 108 is of a different character; the opening movement presents a restless picture of interpenetrating layers of mood. It leads to an Adagio that begins in almost chorale-like fashion after which the theme is then dissipated in ‘Hungarian’ or ‘Gipsy’ style with its improvisatory gestures. The final movement is a stormy rondo, but whereas by tradition the theme of a final movement is tonally closed, Brahms here uses a refrain that is tonally open and therefore of the type that would normally be found in an opening movement; to a certain extent he refuses to consider his statement finished.