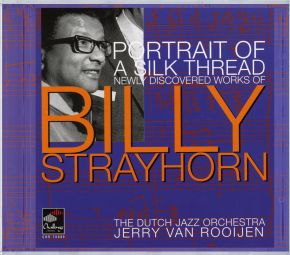 Portrait of a Silk Thread

Portrait of a Silk Thread: Newly Discovered Works of Billy Strayhorn At a 1964 BBC Television concert Duke Ellington called the audience’s attention to “a great, distinguished, and rather eminent personage who happens to be with us tonight. Wisile he is one of the most important people in our group he’s very seldom seen in public appearances, but he’s always heard. It’s my pleasure to introduce the eminent composer-orchestrator Billy Strayhorn.” To a generous applause a shy, small man rose in the audience. He nodded, smiled, then quickly took his seat again. Duke’s introduction points up the remarkable invisibility that Strayhorn maintained during his long connection with the Ellington Orchestra, an invisibility that stands in marked contrast with his significance as a jazz composer. From the moment he had joined the band in 1939 until his untimely death in 1967, virtually every performance and almost every studio session of Duke Ellington and his Orchestra had included compositions and arrangements by Strayhorn. On the average, Billy Strayhorn wrote at least one piece a week during all thirty years he worked with Duke Ellington. That was more than the Ellington Orchestra could handle, especially since Duke himself composed incessantly. Choices had to be made and thus many pieces fell by the wayside, never having appeared on
any of Duke’s many records. Among those ill-fated scores were some of the finest works Strayhorn ever wrote. Luckily, the music of Strayhorn has been preserved for future generations in hundreds of handwritten scores that are safely stored in various music collections. The present CD contributes to the documentation of the rich troves of unknown Strayhorn material. Eight tracks may rightfully claim the epithet ‘world premiere’ since they feature pieces that were never heard before: Blue Star, Bagatelle, Love Has Passed Me by Again, Le Sacre Supreme, Portrait ofa Silk Thread, Cashmere Cutie, Pentonsilic, The Hues. The other tracks were recorded by Ellington or Strayhorn at some point in the past, but this CD gives the original first versions, often written decades earlier than their issued counterparts.