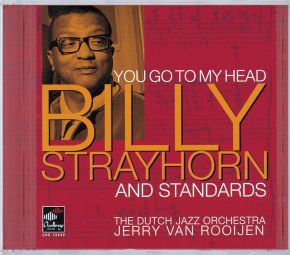 You Go To My Head

The Dutch Jazz Orchestra Jerry van Rooijen - leader | Marjorie Barnes - vocals  The larger part of Billy Strayhorn’s work of Duke Ellington and His Famous Orchestra consisted of writing arrangements. Close to six hundred of his arrangements survive, of which literally hundreds eventually were performed or recorded by the Ellington band. Yet, Strayhorn’s inspiration seemed boundless, and still numerous arrangements had to be shelved. As Mercer Ellington recalled, “If I waited for the band to have a rehearsal, there would always things by Billy they wanted to play.” Strayhorn, an accomplished composer, tackled his arrangements with serious dedication. “You should say, ‘I wouldn’t treat this any less carefully than I would that,’ he once said. “You treat them (originals and arrangements) equally. I put the same effort into whatever I do. I try to do the best I can. I feel it is not right for an artist to turn his back on a simple melody just because it’s not a great suite or something or other. It’s a matter of being humble. All great artists are humble. The ones who’re not are not great artists.”The recorded arrangements on this CD serve as a case in point. Strayhorn virtually composed each song, on its own terms. His adaptations carefully follow the emotional content of the lyrics (even if it’s an instrumental arrangement), and often provide commentary. In his hands, the standards from the “American Songbook” reveal new and deeper layers, with the same overtones that resonate throughout Strayhorn’s own compositions. The dates on these arrangements underline the innovative character of his writing, which was years ahead of that of his peers.None of the arrangements on this disc were ever recorded commercially, with the exception of Where or When, which was recorded by the Ellington orchestra as an instrumental, and is given here in its original vocal guise. Lover Man, too, has been recorded, but in an abridged form—the Dutch Jazz Orchestra plays it as written. Some of the other works (I’ll Buy That Dream, I Don’t Stand a Ghost of a Chance, Can’t Help Lovin’ Dat Man and Yesterdays) have been preserved on recorded radio broadcasts, which currently are hard to obtain.The remaining eight arrangements are not known to be ever captured on record—this is their world premiere.