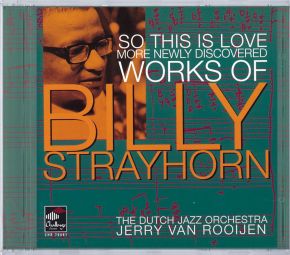 So This Is Love

The present CD is the successor of the widely acclaimed Portrait of a Silk Thread: Newly Discovered Works of Billy Strayhorn, which was first released in 1995. Again, the Dutch Jazz Orchestra plays Strayhorh works that have never been recorded before. In a number of instances, these works have never been performed either. The selection includes works that Strayhorn wrote or arranged while still in Pittsburgh: So This Is Love, Remember and Valse. Strayhorn wrote these four pieces for quite different occasions. The Chopinesque Va/se was a piano solo which he must have performed numerous times as the piano-playing errand boy from Pittsburgh’s Pennfield Drugs, while So This Is Love in all likelihood was intended for his first theater show, Fantastic Rhythm. Strayhorn arranged Irvin Berlin’s Remember for The Rex Edwards Orchestra, a mixed-race rehearsal band that he worked with in 1938. Other works evolve around the Copasetics, a group of tap-dance professionals Strayhorn presided. Their yearly revues were packed with Strayhorn originals and from these origins stem Feet on the Beat (from the 1961 Copasetics revue On the Riviera) and Swing Dance (from the 1962 Anchors Aweigh). Yet the larger part of the titles on this CD are related to Duke Ellington and His Orchestra. Several hitherto unrecorded numbers ave
been played in all likelihood (though not necessarily in public), such as Flame Indigo (which stems from the 1941 theater show Jump for Joy) and Boll Weevil Ballet and Fol-De-Rol-Rol (both from the 1946 Beggar’s Holiday). Other pieces were performed by the orchestra but in different guises: Blue Heart is the original version of the later Paradise, while Orson, and Pomegranate (the latter from A Drum Is a Woman) respectively recorded by Ellington in 1953 and 1956- are given here in
their original full-length versions, since in both cases more than half of the music was cut for the original recording.
The remaining tracks, Jo, Lozit (for Juan Tizol), Tiffany and Matinee are fully unknown numbers Strayhorn wrote for the Ellington band. Finally, Lonely Again is certainly one of the most exciting finds: this is one of two arrangements that Strayhorn wrote the very day after he first met Duke Ellington, December 1938. Strayhorn arranged the work at Ellington’s
request, who was deeply impressed with the song an its lyrics, written by Strayhorn while still a teenager in Pittsburgh. The Ellingtonians never performed the piece, and it would take another decade before Lonely Again became widely known under a different title: Lush Life.