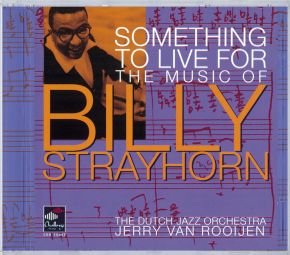 Something to Live For: The Music of Billy Strayhorn

The larger part of the pieces on this fourth Strayhorn CD evolve around music Strayhorn wrote for the theater. In 1935, just out of high school, he composed a short show Fantastic Rhythm. A handful of numbers have survived, including the title song and the cynical Let Nature Take Its Course. A Penthouse on Shady Avenue (one of Pittsburgh’s most elegant streets), might stem from the show too, but the evidence is elusive. Although textually these songs are somewhat juvenile, musically they bear all characteristics of Strayhorn’s later compositions. Another group of theater works stems from 1953, when Strayhorn provided music to a Federico Garcia Lorca play titled The Love of Don Perlimplin for Belisa in Their Garden. Apart from Wounded Love—premiered by the Dutch Jazz Orchestra on Portrait of a Silk Thread—his hitherto unrecorded score includes Sprite Music, The Flowers Die of Love and Love, Love. Strayhorn’s
music for Lorca’s surrealist play is restrained and honest, yet personal and emotionally expressive. He wrote Everything Is Copasetic! for one of the annual shows that the Copasetics, a group of tap-dance professionals Strayhorn presided. From the early 1950s on, they staged cabaretesque fundraisers (never recorded), with music and lyrics largely by Strayhorn. These shows were important events in New York’s black community, and boasted sold-out houses. The other works on this CD are “regular” pieces, composed or arranged for Duke Ellington’s orchestra. Chelsea Bridge and Pretty Girl, well-known works, are featured here in their full, unabridged form, as never before recorded, while Hip, Hipper-Bug and Blue House and the arrangement of Something to Live For are true world-premieres. Strayhorn’s arrangement of Day Dream for Ella Fitzgerald was recorded by Ellington’s orchestra in 1957, but modern recording techniques warranted an overhaul of this majestic score, since now all details of Strayhorn’s writing can be brought to light.
The final track on this CD is the raucous On the Wrong Side of the Rail Road Tracks, composed for yet another theater show: Beggar’s Holiday. Both Ellington and Strayhorn wrote different arrangements of this tune. This one, by Strayhorn, features an orchestral background that calls up a noisy railroad switch-yard.

Please let me know a soon as i is avaiable

Will this CD be coming back into your catalogue?