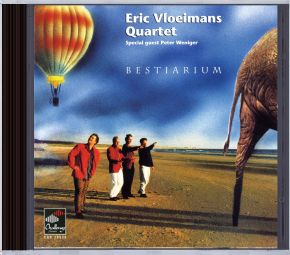 Masterful technique, strong compositional skills, and an original approach make up what Eric Vloeimans and his band are all about. They possess a fresh, unique sound that gives them a special place in the European jazzscene. Critics have compared Vloeimans to Miles Davis and Clifford Brown, although they are quick to admit that he is in no way imitative. The first Challenge release by the Eric Vloeimans Quartet (First Floor - CHR70011) was received with great enthusiasm by the international press. The American ‘JazzTimes’ found First Floor a “recording full of spontaneity and adventure”. The French ‘Diapason’ praised Vloeimans’ “good taste, his lack of cliches and his very personal sound”. Dutch ‘JazzNu’ gave the CD the highest possible score (five stars) because of Vloeimans’ fabulous solo’s, his leadership of the tight band and his original compositions. According to the German ‘Jazz Podium’ Vloeimans “swings with full dynamics, energy and impulsivness. Next to the virtuos solo trumpet, Anton Goudsmit, Arnold Dooyeweerd and Pieter Bast display their talents through contrasting ensemble-playing. With this album Eric Vloeimans establishes himself as one of the most important trumpeters of the Dutch jazz scene”.
Almost two years after the release of First Floor, it’s about time to present the follow-up.

On Bestiarium Eric has again recorded mostly original compositions. The quartet play them with freshness, self confidence and spontaneity, assisted by the talented German saxophonist Peter Weniger. Weniger hass previously recorded with international musicians like John Abercrombie, Carl Allen, Adam Nussbaum, and Dennis Irwin. His soft sound and “airy” lines, combined with incredible virtuosity and good taste make a welcome addition to the Vloeimans Quartet. Add high quality recording and an original and exciting cover design, and you get ‘Bestiarium’, a not to be missed CD.