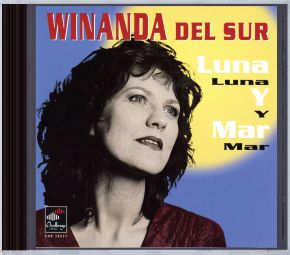 Dutch singer Winanda van Vliet has distinguished herself as a soloist in several different types of music, but always with the same power. During her impressive career she has worked with the vocal group TAMAM, with the a-capella quartet The Oom Maw Maw, and with the RO-theatre. Her passion for Latin-American music started in the seventies, during her studies at the Royal Conservatory in The Hague. Winanda then worked with the Chilian group Amankay, which made her well-known in The Netherlands and abroad. Once, the famous Argentine singer Mercedes Sosa asked Winanda on stage to sing with her, and called her “the best Dutch interpretor of Latin-American song” . Master-of-tango Astor Piazzolla praised the arrangements Winanda made and the performance she gave his compositions. It was with Amankay, that Winanda first worked with the Chilian composer, arranger and musician Patricio Wang. Patricio is well-known for his filmcompositions, for the opera ‘Pinocchio’ and for his leadership of the successful Chilian group Quilapayun. Patricio was also the musical director of La Banda del Sur, the forerunner of Winanda del Sur. After all these years of being one of the leading vocalists in the Latin-American scene Winanda finally recorded her solo-album.

For Luna y Mar Winanda decided on a Latin-American repertoire, and it contains both Latin-American traditionals (from Argentine, Chili, Mexico and Brazil), and compositions of Patricio Wang and Winanda herself. Each song has something to do with the moon (luna) or the sea (mar) and all have been arranged by Patricio Wang. He has combined the best of Western and Latin-American music to create a new sound, which perfectly complements Winanda’s voice with its’ characteristic timbre, at once delicate and strong. On Luna y Mar she is accompanied by a mostly acoustic band that perfectly suits her musical expressivity. Like Patricio Wang, Jaime Rodriguez (Colombia) and Gabriel Aguilera (Chili) were born and raised with the sounds and rhythms of the Latin-American continent. Paul van Utrecht, originally a classical guitarist, and jazz-violin player Jasper le Clercq are both from Holland, but are experienced in playing different Latin musical genres. More importantly, they understand this music by heart. The endresult is a tasteful poetic CD full of rich sounds and colors, and a fitting solo debut by a major artist.