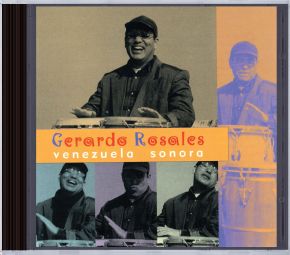 The group Venezuela Sonora was formed in 1995 in Caracas. The ten piece band plays extremely danceable salsa with strong influences from Cuban and Venezuelan folklore. In Francisco Rojas and Vladimir Quintero, Gerardo found two percussionists who can play with the same mastery the bongos, congas or timbales as well as the typical Afro-Venezuelan percussion instruments. Bassist José Velázquez, the mentor of the band, played with Dizzy Gillespie, Paquito D’Rivera and Willie Colón and was for 15 years the musical leader of the Venezuelan orquestra Soledad Bravo. Together with Latin-pianist José Mora he adds a Latin swing to the band which makes people want to dance. The youngest member, the Cuban trumpeter Luis Márquez, performed with Oscar D’Leon and with Lalo Rodriguez. Lead vocalist Carlos Gonzalez is known for his improvisational talents. The Dutch vocalist Astrid Pulles sings on the CD and joins the band on tour, by special invitation of Gerardo.