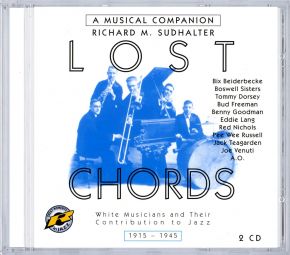 These forty-nine selections constitute a sampler. Much of the music may well be unfamiliar, even to students of jazz history; but there is no questioning its place in the larger historical picture. Important, even indispensable, it rounds out perception, tells listeners where the phenomenon we now accept as jazz, in all its multifarious forms, came from, what it is, and perhaps even how it can survive. Like Lost Chords itself, the music offers a portrait of the white presence in early jazz. Objectively and fairly approached, both book and disks will prove informative, perhaps even enlightening; if they spur curiosity; the urge to find out more about this vast; and largely neglected aspect of jazz history, the excersice will not have been in vain.

Lost Chords, published by Oxford University Press concurrently with release of this double CD set, chronicles not only the role played by white jazzmen over a thirty-year period, but the countless ways in which they interacted with, influenced and were influenced by, their black and creole colleagues. The true story of those early jazz years, then, is a picaresque tale of cooperation, mutual admiration, cross-fertilization; fusion and fission – all despite, rather than because of, the segregation of the larger society.

Dear Bob, you can buy it digital at iTunes, see button on the top. Best Regards, Team Challenge Records

Yes, I'd like to know if the recording is still available anywhere, too.

Want tp purchase the CD set. Where is it available?