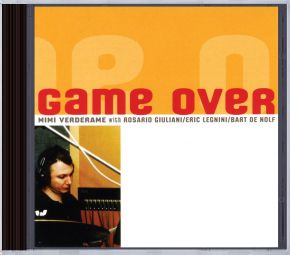 Eric Legnini’s Unknown Tower catches our attention right away; a very interesting composition with a slick rhythmic modulation. After an impressive alto cadenza, the band gets into Mimi’s Kidnapping, a fast tune played at neck-breaking speed. Rosario wrote Mimi, obviously for the leader of this fabulous quartet. A rhythmic tune serving as a vehicle for intense blowing and interaction between the soloist and the drums. The tune ends as abrupt as it started and leaves the listener breathless. I’ll Remember Be Bop is a typical neo-bebop tune. A very nice unpretentious moment in this recording. Wayne Shorter wrote Ana Maria for his now deceased wife. The tender approach of Eric on the Rhodes really fits the atmosphere of the song. It reflects strongly the non-hysterical yet strong emotionality of Brazilian music. Mimi’s Game Over is build around a strong rhythmic vamp. My Flower is written by Rosario. A latin orientated tune, nice harmonies that form a good vehicle for improvisation. Jack Is Jack, soul-jazz, Hammond organ... getting down, just keeps groovin’. Humpty Dumpty, one of Chick Corea’s wonderful compositions. A trio performance here with Eric on Rhodes. The sound of the seventies. This band is not just a gathering of four musicians, it is a band, a well-functioningunit where everybody serves a role. They fit together, they complement each other, they understand each other, they create together. In January 1999 the group decided to go into the studio together, and the result was the extraordinary CD that you hold in your hands right now.