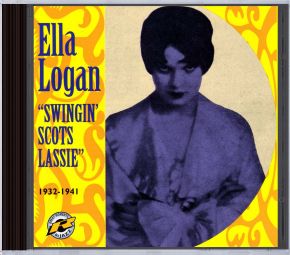 So far as we are aware this is the first CD to be devoted to the slightly off-beat, but very real, talent of this sadly negelected artist. The neglect probably stems from the fact that hers was a talent that is hard to pigeon-hole. How can she be labelled? As a jazz-singer, a comedienne, a musical comedy star? Well, she was all these things. A diminutive, red-headed dynamo, she was performing on stage in her native Scotland at 3 years old. Still in her teens, she was starring in Variety in London, Paris, Berlin and Amsterdam and recording as a band vocalist with Ambrose, Jack Hylton and Jack Payne, as well as in duet with crooner Al Bowlly and solo. These early sides show that she was probably the first British vocalist who could swing (See “Hot Hylton” Retrieval RTR 79024 for a good example). In 1932 she was in New York and her career from then on was in America. Our CD starts with a previously unissued test recording of “Dinah” made soon after her arrival there. From 1933 comes a rare title with Abe Lyman’s popular orchestra. Two 1934 sides with Adrian Rollini (“It Had To Be You” never issued as a 78) find her swinging happily in the company of such jazz luminaries as Benny Goodman, Jack Teagarden and Bud Freeman. There were a few, mainly nondescript, films in the late ’30s, but in “Goldwyn Follies”she got to introduce Gershwin’s “I Was Doing All Right” and recorded it along with the lovely “Love Is Here To Stay” from the same film. On the same session she made the first of a long and popular series of recordings of “swing” versions of Scottish folk songs, with a few old vaudeville numbers and even a couple of Cockney music hall pices thrown in.In 1940, back on stage in “George White’s Scandals”, she introduced two great standards “Are You Havin’ Any Fun?”, “Something I Dreamed Last Night”. There was also a classic pair of duets with Hoagy Carmichael. Her fame peaked with the lead in the hit Broadway musical “Finian’s Rainbow” in which she sang “Old Devil Moon” and “How Are Things In Glocca Morra” , but these lie outside the scope of this album.
Her sides with The Spirits of Rhytm are included on Retrieval RTR 79004 with the rest of their output. Her niece is the famous jazz singer Annie Ross.