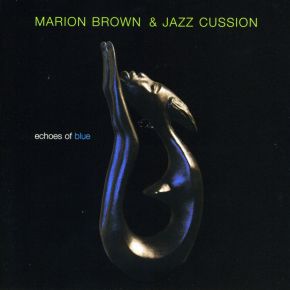 After a break of several years without a release, the American alto saxophonist set off on an – for him – unusual path with the ensemble JAZZ CUSSION. ECHOES OF BLUE is Brown’s first (although it is hard to believe) purely standard album ranging between ballads and Latin classics. It’s a professionally produced work, which lets his lyrical vein develop to its fullest. Reminisces of his mentors Duke Ellington (Prelude to a Kiss) und John Coltrane (Naima) are of course unavoidable. The musicians sketch light, airy outlines with virtuoso playing on guitar, double-bass, drums and percussion, which make the artistic encounter between JAZZ CUSSION and MARION BROWN into a thoroughly delightful experience. Especially the exciting dialog between Brown’s saxophone and Michael Möhring’s guitar gives the pieces a deeper, poetic dimension. This creates the decisive element shaping this album, which makes it clear that they have something to tell each other. Aside from Stella By Starlight – a rousing showcase for JAZZ CUSSION in a guitar-trio format – the American is the focal point of the music in all pieces: a revelation, not only for fans of Marion Brown!