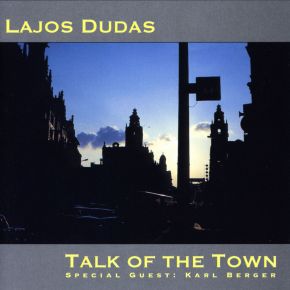 Talk of the town

Talk of the Town – the clarinetist Lajos Dudas presents his own, very intimate and extremely intensive style, ”the latest and hottest in the city,” from his native metropolis of Budapest. The cover shows the dreamy and historical skyline of the Hungarian capital – a magnificent sunset, fitting for the moving interpretation of timeless songs and compositions as well as the profound originals of the clarinet master, with arrangements that are very witty at times and at other times very moving. As he already demonstrated in his previous album Some Great Songs (DOUBLE MOON 1005-2), Lajos Dudas proves to be a cunning, imaginative and meticulous composer, a unique virtuoso on his instrument and a creative, varied and witty arranger. Talk of the Town is nothing new, but this project follows up on the very successful concept of the previous album and provides top-rate, excellent entertainment. Lajos Dudas, his quartet and the outstanding star guest Karl Berger, who by the way can be heard on a new recording for the first time in 10 years, have a lot to contribute to the latest and hottest in the city – it’s the Talk of the Town!