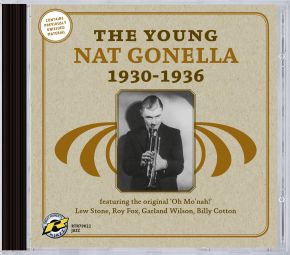 Small in stature but large in talent, trumpeter/singer Nat Gonella was Britain’s first major jazz star . Born in London on 7th March 1908, he made his first records in 1930 with Billy Cotton’s band and his last in 1998, a year before his death on 6th August 1999 at the age of 91. This collection brings together some highspots from his early recording career, including some real rarities. Among them are a previously unissued take of his famous set piece “Troublesome  Trumpet”, a thought-to-be unissued side with Ray Noble, and a rejected side  with Carson Robison. Here too are the very rare sessions for the Oriole label with Stanley Black’s Modernists and singer Nan Blakstone, plus Nat’s original versions of his famous signature tune “Georgia On My Mind” and his 1975  Dutch chart hit “Oh, Mo’nah”. All of these, plus 15 more classics in sparkling new transfers by John R. T. Davies make this CD a must for all Nat Gonella fans.