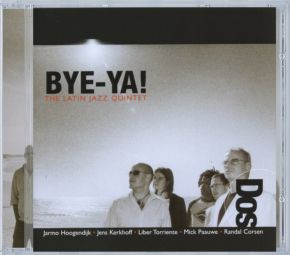 BYE-YA! was founded in the beginning of 1999 with the idea to create a new combination of Latin-music and Jazz. The interaction and openness of jazz are mixed and integrated with exciting and swinging Latin American and Afro-Cuban grooves. Complex harmonic accompaniment and exciting rhythms build up the basic for beautiful melodies and inspired improvisations - this is the formula of BYE-YA! In 2001 BYE-YA! released their debut album: Bye-Ya! The Latin Jazz Quintet on A-Records (AL73215), which received many national and international reviews.   Jarmo Hoogendijk - trumpet (Holland/Finland) has built a great international career over the last decades. He has toured and recorded with great bands such as Nueva Manteca, European Jazz Ensemble, CuBop City Big Band, European Trumpet Summit and artists like Woody Shaw, Clark Terry, Giovanni Hidalgo and many more. Jens Kerkhoff - conga’s, batá’s, chékere, güiro (Germany) is one of the "first call" percussion players in Holland and Germany and a masterful conga player. He has performed with a.o. Lotz of Music / Shango's Dance, Rumbat, Nueva Manteca, CuBop City Big Band, New Cool Collective, Perla Negra, Brian Lynch and Nadja Schubert. Liber Torriente - drums (Cuba) became drummer of the Cuban nr.1 salsa orchestra NG-La Banda at the age of 18! After moving to Holland he has become the most in demand Latin drummer/timbalero, performing with a.o. G-La Banda, Ramon Valle, Rumbat, Bayuba Canta, Laura Fygii, Fernando Lameirinhas. Mick Paauwe - babybass (Holland) is one of top Latin bass players in Holland and one of the few European bass players who masters the baby-bass. Mick has performed with a.o. La Banda Ir‚, Gerardo Rosales, Saoco, New Cool Collective Big Band, CuBop City Big Band, Nueva Manteca and Brian Lynch. Randal Corsen – piano, campana (Curaçao) is well known as a jazz - and Latin piano player who is a master at combining these two styles. Randal has performed with a.o. Izaline Calister, Denise Jannah, Gerardo Rosales Latin Jazz Project, Roy Hargrove, Ronald Snijders and Cross Currents.   What (wat voor soort/stijl muziek) & Why (waarom deze opname/bezetting)
What you hear on this CD is the total of five different backgrounds, nationalities, characters, creative visions and musical evolutions which together make up the unique sound of BYE-YA! This is not just a project or pickup group assembled for a recording, this is a band! A band of five musicians lifting each other's playing to a higher level. BYE-YA! is synonymous with a quintet working together for a common good whilst at the same time having an immense liberty to express and profile themselves individually.   The repertoire you hear on this album are all originals by the musicians themselves, composed and arranged to highlight the unique qualities of the bandmembers and at the same creating the incomparable sound of BYE-YA! It’s Latin jazz at it's best - more than a mix between these two styles, it is interaction and reaction between Latin music and Jazz. For more info check out: www.bye-ya.com   Also available: BYE-YA! The Latin Jazz Quintet [cover afbeelden] A-Records AL73215