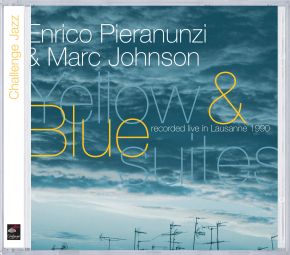 1990 was a “turning point” for me, both in terms of my private life and of my music. It was in that year, in fact, that I decided to open up my way of improvising much more than I had in previous years. I felt that the time was right, despite the current trends or styles. I talked about this with Marc on the occasion of a couple of concerts we did together in the summer of that year and he agreed to explore this new “musical land” along with me (my musical collaboration with him had begun back in 1984, in Italy and, prophetically, the first album we had recorded together, in trio with Joey Baron at the drums, was entitled “New Lands”). The tour we had scheduled for December of that year gave us a fantastic opportunity to test this new conception, and the concert we gave in Lausanne for Radio Suisse Romande was surely the peak of our experimental “new way”. I clearly remember that we hadn’t planned anything before the performance, we just began to play, following any suggestion arising from our imagination, feelings and interplay. The results were the two suites now published here, which offer a mix of standards treated in a very flexible way alternating extemporaneous interludes or episodes.
I’d especially like to thank Marc Johnson for the sensitivity of his partnership here and to express all the joy I feel now that this music has been made accessible to a wider audience after such a long time. (Enrico Pieranunzi)
There were times on this brief tour when I felt musically, I was on such an exploration, hearing and actually speaking another language with Enrico. Certainly this performance in Lausanne was the most clear example of those conversations. I am very happy that this recording is being made available and hope that those who listen can voyage with us down this foreign road on that day in Lausanne, and hear and sense what we were talking about.