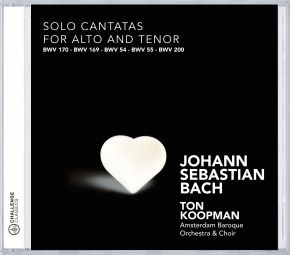 Solo Cantatas for Alto and Tenor

Most of Johann Sebastian Bach’s cantatas, from the earliest to the latest, require the participation of a choir that consists of soprano, alto, tenor, and bass voices. However, most of the movements of these cantatas – that is, all recitatives and arias – are assigned to solo singers usually representing three or four different voices.

In Weimar and in Leipzig Bach had a few professional singers he could make use of for particularly challenging vocal roles. A small contingent of stipends was provided by the Leipzig city council for Bach to hire a few key singers. Bach’s alto soloists were male and one of them was Bach’s student Carl Gotthelf Gerlach, who served as music director at Leipzig’s Neue Kirche from 1729 to 1761. He definitely served Bach as alto soloist in 1728 and 1729, most likely also earlier, so that he may well have been the singer who first performed cantatas BWV 169 and 170.

The alto solo cantata “Vergnügte Ruh, beliebte Seelenlust” BWV 170 was written for the 6th Sunday after Trinity and first performed on 28 July 1726.

The cantata “Widerstehe doch der Sünde” BWV 54, written for Oculi Sunday, the 3rd Sunday in Lent, was performed in Weimar on 4 March 1714, but probably originated in 1713 or earlier.

The alto aria “Bekennen will ich seinen Namen” BWV 200 represents a fragment from a cantata whose other movements are completely unknown.