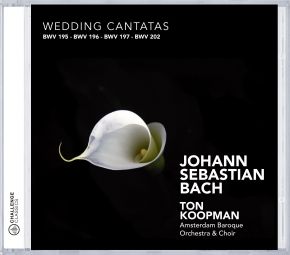 Bach composed his church cantatas not only for the regular Sundays and feast days of the liturgical year but also for specific occasions. Among the most important of those were weddings of usually well-to-do couples who ordered a particularly elaborate ceremony or, in terms of Leipzig practice and terminology during Bach’s time, a Full Wedding Mass instead of the more frequent and less expensive Half or Quarter Wedding Masses.

The larger Leipzig pieces for Full Wedding Masses were ordinarily performed in two parts, before and after the sermon, as can be seen in BWV 195 and 197. The cantata “Dem Gerechten muß das Licht“ BWV 195 survives in several versions. Its origins date from before 1730, a second version from about 1742, and a final one follows in 1748-49.

“Der Herr denket an uns“ BWV 196 was in all likelihood composed at Mühlhausen around 1707-08, that is around the time of Bach himself getting married to his distant cousin Maria Barbara on October 17,1707. The cantata “Gott ist unsre Zuversicht“ BWV 197 dates from about 1736-37 and must have been written for a prominent Leipzig wedding ceremony.

“Weichet nur, betrübte Schatten“ BWV 202 is a cantata for soprano solo and, as the text clearly suggests, written for a wedding. However, no further details are known.