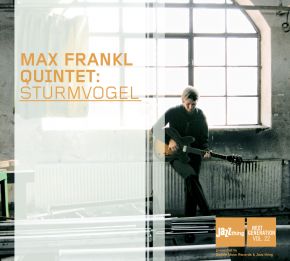 Max Frankl already has an impressive resume in the middle of his 20s. Not only his education in Amsterdam, Basel and Lucerne with teachers such as Johannes Enders and Wolfgang Muthspiel and currently with Kurt Rosenwinkel and Frank Möbus tell a lot about him, but also his numerous prizes at „Jugend Jazzt“ (Young People Play Jazz) as well as his performances, among others, with the German Jazz Orchestra. Max Frankl not only developed impressive virtuosity in workshops held by people from Pat Metheny to Maria Schneider and Joe Lovano and in performances with Lee Konitz and the South African Feya Faku, among others, but he has also found his own voice. His compositions are of such a lightheartedness and clarity that they even filled Peter Herbolzheimer with enthusiasm; they have already been arranged for the German Jazz Orchestra. Wolfgang Muthspiel („somebody is starting on a long journey here, and we are permitted to listen,“ he wrote in the liner notes) did not want to miss the chance to produce this album, which is certainly a win for the sound.

The group members, with whom Max Frankl also go on tour, are of the highest quality. Ulrich Wangenheim is known from his playing with Johannes Enders (EndersRoom), Christian Elsässer is one of the most important young pianists in Germany, Andreas Kurz (among other things, bassist in EndersRoom) and Andi Haberl (swung the drumsticks on Doldinger’s Passport and Till Brönner, among others) are big, established names in this country. And his friend and mentor Nils Wogram is always willing to support his young colleague in performances.