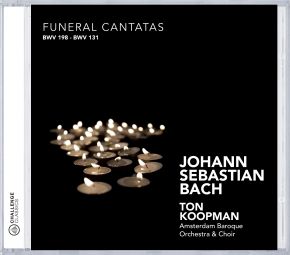 The two cantatas selected for the present album represent particularly representative and distinguished works of mourning character from very different periods in Bach’s creative life.  The cantata “Aus der Tiefen rufe ich, Herr, zu dir” BWV 131 originates from Mühlhausen and was written in 1707 or 1708 for an unknown occasion, most likely an penitential service and perhaps related to the big fire that had devastated large sections of the town of Mühlhausen shortly before Bach’s arrival there in 1707. An annotation by Bach in the original score indicates that that work was commissioned by the pastor of St. Mary’s Church in Mühlhausen, Dr. Georg Christian Eilmar. He apparently was also responsible for the compilation of the libretto.

The Funeral Ode “Laß, Fürstin, laß noch einen Strahl” BWV 198 on the other hand is a large-scale, two-part cantata composed twenty years later in Leipzig in commemoration of the death of the Electress of Saxony and Queen of Poland. It is based on a morning poem in strophic ode format by Johann Christoph Gottsched, at the time Leipzig’s most celebrated literary figure. The artful poem was commissioned by an aristocratic student, Hans Carl von Kirchbach, in the name of the “German Society” at the University and for the academic act of mourning for the death of the Electress of Saxony and Queen of Poland, Christiane Eberhardine, wife of Augustus the Strong. Kirchbach commissioned the music for the event from another Leipzig celebrity, Johann Sebastian Bach, and not from the music director of the University, Johann Gottlieb Görner. The latter complained, but accepted the fact that this was an unusually prominent occasion. The work of 1727 could not be performed again in this form because the text makes concrete references to the queen. However, in 1731 the composer reused major parts of the Funeral Ode for his St. Mark Passion, now lost.