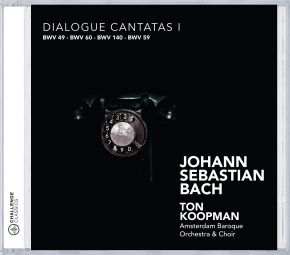 Patterns from the dialogue tradition, especially the relationship of specific vocal ranges associated with dramatic or allegorical figures, occasionally also enter the non-dialogue repertoire. Hence the “vox Christi” of the Passion oratorios or quotations of Jesus words are invariably assigned to the bass voice; likewise passages that represent the believing soul, for example, in the aria text “Aus Liebe will mein Heiland sterben” from the St. Matthew Passion assigned to the soprano voice.

“Ich geh und suche mit Verlangen” BWV 49 was first performed on November 3, 1726. “O Ewigkeit, du Donnerwort” BWV 60 was written for the 24th Sunday after Trinity and received its first performance on November 7, 1723. “Wachet auf, ruft uns die Stimme” BWV 140 was composed for the last Sunday of the church year, the 27th after Trinity, and first performed on November 25, 1731. “Wer mich liebet, der wird mein Wort halten” BWV 59 was written for Whit Sunday and performed in Leipzig on May 28, 1724, but perhaps also the year before, on May 16, 1723 at the Pauliner Church for the service of the university community, for which Bach was responsible on the high feasts.