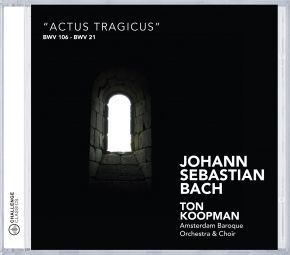 The two cantatas chosen for this album represent works composed by the younger Bach when he held positions as organist in Arnstadt (1703-07), Mühlhausen (1707-08), and Weimar (from 1708) and was not yet primarily responsible for vocal music. Supplying regular pieces for Sundays and holidays (“music of cantors”) was not part of the duties of an organist. Organists, however, frequently wrote works for funerals, weddings, and other special occasions. Bach apparently engaged in this kind of compositional activity from the very beginning even though only a fraction of pertinent works have survived.

Bach’s earliest vocal works demonstrate impressively that he understood how to operate on the level of the greatest composers of the late 17th century, indeed how to compete with Buxtehude, Pachelbel, and the older members of the Bach family, including above all Johann Christoph and Johann Michael Bach. Moreover, he knew how to introduce new musical elements into composing sacred pieces. Works like BWV 106 and 21 demonstrate how, in a deliberate confrontation with traditional and modern trends, Bach laid the foundation for a ifelong and extraordinarily productive occupation with the cantata genre.

The cantata “Gottes Zeit ist die allerbeste Zeit” BWV 106 was composed for a funeral or memorial service. It must have been written at around 1707. The oldest source is a copy dated 1768 and made in Leipzig. It bears the heading “Actus tragicus,” a title that clearly sets the tone of the piece.

The cantata “Ich hatte viel Bekümmernis” BWV 21 shows a compositional design of a manner typical of the early Weimar period. It was not written for a specific liturgical occasion but could be performed “at any time.” However, the first documented performance took place in Weimar on the 3rd Sunday after Trinity in 1714. Yet the work is clearly of earlier origin even though its first version - most likely a setting of various psalm texts - did not survive.