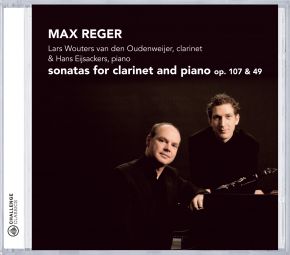 The true musician is like an archaeologist: In his search for hidden beauty he must often dig through a deep layer of sand. It is a metaphor that certainly applies to Lars Wouters van den Oudenweijer. This young Dutch clarinettist doesn’t believe in playing a wide, accessible repertoire. Pure curiosity consistently drives him to obscure, little played works by composers whose lot was to remain overshadowed by celebrated contemporaries. His incessant quest for ‘the other nuance’, as well as an urge to convey ‘difficult’ music to audiences, led him to Max Reger, who was surrounded by a firmament of illustrious and revered colleagues such as Johannes Brahms, Gustav Mahler and Richard Strauss. “I feel that Reger’s music deserves more attention,” says Wouters about the recordings that he and his regular pianist Hans Eijsackers have issued of the composer’s three sonatas for clarinet and piano. “These sonatas are seldom played, which is a real shame!”

The fact that these clarinet sonatas – op. 49 nos. 1 and 2 and op. 107 – have remained so little known has nothing to do with the quality of the works, according to Wouters. It is rather the thick layer of sand which, as a ‘musician-archaeologist’, you have to burrow through before emerging into the personal, isolated world of Max Reger. “Even in the deeper layers you don’t happen right away on a beautiful melody that simply speaks for itself,” explains the clarinettist.

Is that why the works are played so seldom?
“I don’t think so. Beauty is relative. I like the melancholy shades of the sonatas, the deep autumn colours, that solemn dark brown, the sun suddenly breaking through the clouds. No, I rather think that many clarinettists avoid them because they are so difficult. To start with, Reger composed very long lines without giving much consideration to the fact that you have to breathe occasionally. Not only that, he often modulates after every bar, meaning you find yourself in keys that are very awkward on the clarinet.”

So Reger made no allowances for the nature of the instrument?
“No. He had heard the clarinet sonatas that Brahms wrote in 1894 for Richard Mühlfeld, a clarinettist he greatly admired. He was so taken with them that he decided to follow suit. The first two he wrote very quickly, in 1900, assigning them a single opus number. The third, which is much more melodious and accessible, came about eight or nine years later. He wanted to let the clarinet sing, which led him to write fiendishly difficult passages. Difficult, but not impossible. Though I wouldn’t be surprised to hear that other clarinettists have occasionally decided to give them a miss.”

Why didn’t you think that?
“Because the music is close to my heart. I hear a man who loved his music.”

How would you describe Reger as a human being?
“Headstrong, passionate and not easy to get on with. Eccentric and therefore isolated. He was a man who battled against small-minded values. Well known is the fact that he drank a lot and often composed in a café. A notoriously awkward customer, he would order five beers after the publican had called out ‘last orders’, and then kick up a fuss if he didn’t get them.

Is it important for a musician to have this sort of psychological and musicological knowledge about a composer in order to be able to interpret his music properly?
“Obviously you can’t ignore the man himself or the time in which he lived. More important, however, is, I think, your own intuition. The kind of playing this music calls for is something you have to feel for yourself. The question, ‘What do I feel in response to the music?’ is at least as important. If you only look at the musicological aspects, the risk is that your interpretation will sound really distant. You have to give the music something personal.”

You did that and then you went into the studio…
“…which is a totally different playing field. There you have that microphone, and you know it hears every single thing. You’re faced with the knowledge that you have to record seventy minutes of difficult music in two days. The acoustic is not natural. That’s your next struggle: all those artificial constraints and obstacles you have to overcome. And all the time you have to be occupied with the music.”

But don’t concerts have external factors that distract from what it’s really about, i.e. the music?
“Of course, but much less so than in the studio. During concerts you have the composer-performer-audience triangle. And the tension this creates – that’s what makes the music, that’s what makes it human. In front of a hall full of people it’s easier to go in search of the space the composer has given you to communicate his music to them. The fact is that good composers always create this space. Obviously you do the same thing in the studio, but there it’s more difficult simply because there are no people in it. That’s why, like in this case with Reger, it gives that extra satisfaction when it works.”

You’ve now been, as it were, intensively involved with Max Reger for some time. Do you think he was a nice man?
“Yes! I think I would have liked him a lot. I’m fond of people who remain true to themselves and believe strongly in what they do, and therefore don’t follow the welltrodden path.”

People like Lars Wouters van den Oudenweijer?
“You could say that, yes. There’s a good reason why I chose Reger’s music...”