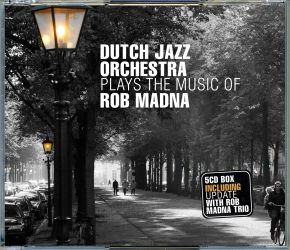 Guest soloists: Tom Beek, Ferdinand Povel: tenor saxophone | Ack van Rooijen, Jan Wessels: flugelhorn | Maurice Kliphuis: horn | Disc 4 featuring: Rob Madna: piano, synthesizer, trumpet, flugelhorn | Toon Roos: soprano and tenor saxophones (disc 5): Rob Madna Trio: Rob Madna: piano, synthesizers, trumpet | Frans van der Hoeven: bass | Eric Ineke/ Dré Pallemaerts: drumsFour discs of this set contain the bigband arrangements of Rob Madna, played by the Dutch Jazz Orchestra, the fourth disc featuring Madna in person as soloist. The fifth contains a reissue of trio recordings, where Rob reveals himself even more as multi-instrumentalist. According to Madna, his sources where Count Basie, Oliver Nelson, Gil Evans, and most notably the Thad Jones-Mel Lewis Jazz Orchestra. By the mid-1960s Madna’s reputation as a true musician’s musician was such that Thad Jones asked him to join his orchestra as a pianist and arranger. Rob in all honesty felt that he was not original enough to bring something new to the sound of the Thad Jones-Mel Lewis Jazz Orchestra. Jones, who only worked with the best, protested vehemently, but Madna wouldn’t budge.