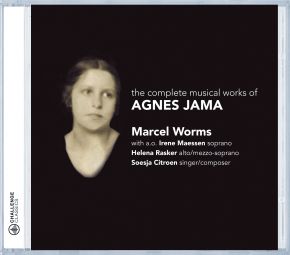 Agnes Jama was born in Dürnstein on the Danube (in the former Austria-Hungary) from the union between Louise van Raders, a noble-born Dutch woman and painter and the Slovenian impressionist Matija Jama. Program booklets showed that she was a pianist who played from a mainly traditional and impressionistic repertoire, however every now and then she would play works of Yugoslavian composers. She was open to music from all corners of the globe, the intention being that the propagation of such music would lead to a new cosmopolitan style. She wasn’t afraid to publicly express harsh criticism for the sterile music of the post-war era. She saw no value in atonality and, in direct opposition to the current fashion of the day, she composed her own melodic pieces in the style of romantic impressionism.

Mainly in the 1950’s, she composed four chamber music works. This is how a Suite for Violin and Piano, a Sonatina for Piano, a Sonata for Cello and Piano and a cycle of Three Songs for Voice and Piano came into being. Her fifth, and last, composition clearly stands out in her small oeuvre, a piece of work that she completed in 1970: Vocatio for Mezzo-soprano, Clarinet and Piano. Here, she showed that she didn’t shy away from experimentation, as if the experimental era in which she lived and a course by composer Ton de Leeuw had clearly left their mark. In what would be her swansong, she created her own abstract-expressionistic vocals, after endlessly studying singing from all over the world.

A few years before her death, she asked her daughter Soesja to write and sing a text for the theme from her Sonata for Cello and Piano but at the time it was too sacred to Soesja to handle. After she was gone, Soesja wrote “Song for Ma” in her memory. It is a jazz piece with an introductory verse referring to her cello theme.

Is this CD available in the USA?
Agnes was my grandfathers niece.