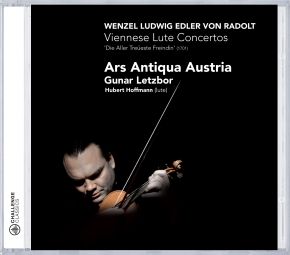 Wenzel Ludwig Edler von Radolt’s collection of lute music entitled ”To my most true and confiding friend”, inclined both to the merry and to the sad humours, herewith in the company of other faithful vassals of our innermost sensibility’ was printed in 1701 in Vienna by J(oh)ann Michael Nestler and bears a dedication to the then‚ Roman King’ Josef I.

Radolt was of Austro-Italian aristocratic descent. He was born and died in Vienna. According to his own account, he spent his life ”so allured by the beguiling countenance of most pleasurable music, as to dedicate the course of my life to her“. The ‘Most true and confiding friend’ is the only work of Radolt that survives today. Unusual in the part books are Radolt’s meticulous fingerings for the right hand (!) that give us a precise insight into the style of lute playing current in the imperial city of the period.

This extensive collection of 12 so-called ‘Concerti’ contains much that is remarkable about the Viennese Lute Concerto – a popular genre of the day comprising violins, lute and bass. The variety of scoring is striking: from four-part string writing with three obligato lutes of various sizes, to the relatively intimate combination of single violin, obligato viola da gamba (viol), lute and bass. In another concerto the composer suggests the addition of a wind instrument.
The codex represents the most extensive source of a neglected genre, that once enjoyed great popularity in the German speaking countries – including composers such as Esajas Reussner.