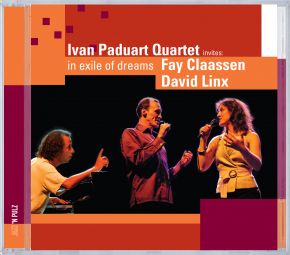 More than 15 years in the meantime I practice the astonishing profession named musician. From the very beginning I was heavily tempted in writing my own compositions and moreover going through the pleasure thereafter of the attraction in performing my own pieces in public.
Originally inspired by classical music I discovered at last that jazz was the most perfect way making my music as valuable as possible. The variety of so many different shapes, rhythms, harmonies and above all things the endlessness offered by improvisation that gave me the belief that everything was possible even playing wrong notes. Preferring to play in a trio setting the strongest satisfaction given to me was writing compositions for musicians chosen by myself as Tom Harrell, Bob Malach, Toots Thielemans, Richard Galliano, Charlie Mariano, Rick Margitza and Toon Roos.
As I met Bob Hagen in 2001, I was touched by his enthusiastic readiness to support musicians provided that he admired their qualities. His support and unshakable belief in my values as a
composer he made several projects and important concerts possible for me. On behalf of this album I invited two special vocalists both so very much admired European male and female singer David Linx and Fay Claassen. (Ivan Paduart, liner notes)
The Jazz Impulse Foundation was founded for the purpose of supporting musicians deserving greater recognition. During the quality selection there is a careful assessment considering opportunities and possibilities for the future success of these musicians. Ivan has the ability to compose in such an unexpected way that he is always recognizable in his work in a way nobody else does. His pieces, never superficial and never dull, are surprisingly lucid.
Every new composition again is an unbelievable experience, and many great and well known jazz musicians are always willing to play with him and of course especially his beautiful compositions. My very firm believe is that sometime in the future Ivan will unmistakably reach the status of a famous composer.
Next to the instrumental quartet pieces in which the marvelous playing Toon Roos on saxophone proves his unbelievable musical and lyrical intelligence there is also a solo piece in which Ivan proves consistently his fresh ideas. But the overtone on this album is dominated by two singers, both together or individually singing: Fay Claassen and David Linx who made individually already many cd’s. Without doubt you are within a few minutes convinced that here are gathered two of the best jazz singers of Europe with highly artistic repertoire. Though they both are qualified improvising soloists on this cd they don’t do that. They will impress you with a vivid blend of their vocal qualities with a number of not easy listening songs. For advanced music inquisitives these singers take their chances to the full extend to lead them to the limits of full admiration.