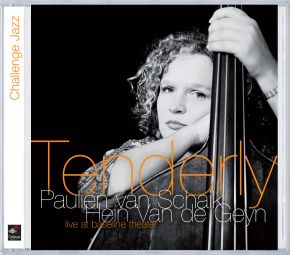 Paulien van Schaik and Hein Van de Geyn met and kept bumping in to each other. They played together quite often and after a while they felt a record was a logical thing to do next:  "So we had to record.... and man, that was going to be easy. A few good mikes, a good machine.... Hours were put on tape. And we listened, and we were critical.... and it just was never good enough. Close to perfect... yes, but lacking in that outward emotion. We couldn’t catch on tape what we had felt during those informal evenings at the club. In the meantime I had built a theater at my house. A cozy, lovely room with a stage, nice light, a good sound and place for 40 people to sit and have that glass of wine, and experience the utmost intimate setting to enjoy music in. So here we had it, the perfect ingredients: a place, an audience, those same mikes and recorder. Three Sunday afternoons were planned, people came. We all had a wonderful time together. Informal, intimate, magic. 5 hours of music resulted. And a great memory. And... it had worked. We captured the essence somehow.  We took the best stuff, went to the studio of my main man Chris Weeda, who polished the music, and put the whole thing in a perfect balance."- Hein Van de Geyn in the linernotes of Tenderly