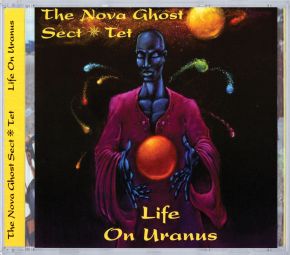 The music of the Nova Ghost Sect*Tet was developed out of 12 years of performance experience in the contemporairy dance community and the ‘new music scene’ of the San Francisco Bay Area. There, saxaphonist Ghasem Batamuntu performed with such jazz luminaries as Sun Ra, Pharoah Sanders, Sonny Simmons, Bobby Hutcherson, Rasul Siddik, and Julius Hemphill. Prior to this Batamuntu spent several formative years with Jackie McLean as a student in the community based arts project : The Artist Collective in Hartford, Conn. In 1992 Batamuntu received a composition fellowship for Music for Choreographers moving then to Amsterdam to extend the global ‘concept’ encoded in the performance of his unique compositions .
In this diverse collection of 11 compositions we are presented with new vistas in music that acknowlegde the great contributions of the jazz legacy, as well as incorporate many of the contemporairy performance concepts that appear in this: The Age Of Aquarius.