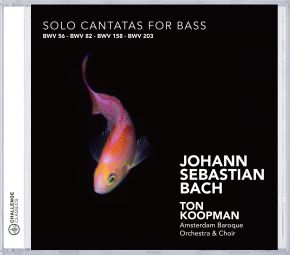 Recorded at the Waalse Kerk, Amsterdam 1995 (BWV 203) and 2001 (BWV 56, 82, 158)
The performance of Johann Sebastian Bach’s cantatas usually requires a choir of soprano, alto, tenor, and bass voices. Within these cantatas, however, all recitatives and arias are assigned to solo singers usually representing three or four different voices.

Few of Bach’s professional solo singers from Weimar and Leipzig are known, but it is clear that he always had a few particularly competent soloists at his disposal - in Leipzig through stipends provided by the city council. One of Bach’s principal bass soloists in the 1740s was his private pupil and later son in law, Johann Christoph Altnickol. He came to Leipzig from Breslau (Wroclaw), where he had been a paid choir singer at the Mary Magdalene Church. He moved to Leipzig in order to attend the university, taking along two fellow choristers and soloists, who also entered Bach’s ensemble.

The solo cantata “Ich habe genung” BWV 82 was composed for the Feast of the Purification of the Virgin Mary on 2 February 1727. The author of the text is anonymous.

The solo cantata “Ich will den Kreuzstab gerne tragen” BWV 56 was first performed on 27 October 1726, the 19th Sunday after Trinity.

The cantata “Der Friede sei mit dir” BWV 158 survives with designations for two liturgical occasions (Purification/Third Day of Easter) in a manuscript copied by a reliable scribe shortly after Bach‘s death. The origins of the work are therefore uncertain, but most likely it represents an expansion of a solo cantata originally written (like BWV 82) for the Marian Feast of Purification on 2 February.

"Amore traditore” BWV 203, in the typical format (aria-recitative-aria) of the Italian secular solo cantata, is based on an anonymous text that was also set by the Neapolitan composer Nicola Fago (1677-1745). The visit of the famous bass singer Riemschneider at the Cöthen court in 1718-19 suggests that the piece was most likely written at that time and for a prominent appearance of two superior virtuosos.

The new album of Klaus Mertens and Tini Mathot is finally released!Bas-bariton Klaus Mertens and Tini Mathot on fortepiano share with us famous songs of Franz Schubert. Songs like Erlkönig, An die Musik, Prometheus, Die Forelle, Du bist die Ruh and many more have been selected by the duo and they give us their illuminating vision and version of songs we all know so well ...