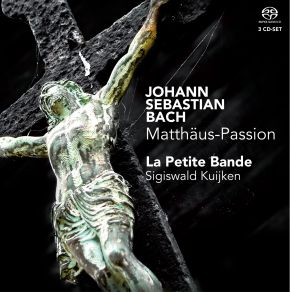 Magnificent and transparent, a recording of the famous masterpiece by J.S. Bach by La Petite Bande and Sigiswald Kuijken. The ensemble has a worldwide reputation of aiming for the most authentic sound possible. Again Kuijken and his group of musicians and vocalists have achieved this the most sublime way!

Sigiswald Kuijken knows the St. Matthew Passion through and through. With La Petite Bande he gave performances of the work all over the world. Twenty years ago La Petite Bande (at that time with conductor Gustav Leonhardt and Kuijken as concertmaster) made their first recording of the Passion. It was a recording with soloists, a chamberchoir and an orchestral composition which was adjusted to that. Since then Kuijken's vision on this masterpiece has changed very much. Ground-breaking musicological work of the last decades has brought him to a serious thin-out of his ensemble without the use of a conductor. There is not a real choir anymore, because the soloists perform also the choirparts. The boyschoir that is usually used in most performances of this Passion is replaced here by a single soprano voice!

Additionally, by using authentic instruments and the original way of playing them, both in interpretation and sound quality, La Petite Bande strives to revive baroque music as faithfully as possible without lapsing into rigid academics.

Dear Josh,
It is DXD/DSD. Hope that answers your question.


This Stereo / Multichannel Hybrid SACD can be played on any standard CD player.

Is it correct that this SACD is stereo only and does not contain multichannel sound?

Dear Dirmeikis,
No problem, we hope you will like the music!

My previous question was useless. Immediately after posting it, I saw the price and the basket icon appear, showing that the set is now available. Therefore I ordered it... Looking forward to receiving it.

This is great. When will it be released? The info might be somewhere on the site but I couldn't find it...

Dear Herby,
Thank you for your comment! We added the solïst to the description field. We hope you enjoy the recording as much as we do!

Dear Herby,
Thank you for your comment! We added the solïst to the description field. We hope you enjoy the recording as much as we do!

Happy to get this soon - but why do you not mention teh singing soloists on your page?

"
24-06-2010 Reformatorisch Dagblad
"With Kuijken no major drama, but modesty, intimacy and transparency. In his interpretation we hear his awe for the text. "
23-06-2010 Artsenkrant
"One of the pioneers of Bach solo occupation is Sigiswald Kuijken. Kuijken opts radically for solo occupation. The soloists that interpret arias, also sing the choral parts what leads to one voice per vocal group in the two choirs that Bach provided in the Matthew Passion."
23-06-2010 AVROTROS website
"Mendelssohn was impressed by Bach's masterpiece and decided for a reenactment, but then adapted to the musical fashion of his time: with a romantic symphony orchestra and a large choir. It took almost two centuries, before the Matthew Passion slowly was stripped to the small cast of Kuijken and La Petite Bande. "
15-04-2010 De Bond
"Passion of the passions, La Petite Bande. It was inspiringly performed for a wide circle of music lovers.-"
15-04-2010 Tertio
"Sigiswald Kuijken is familiar with the St. Matthew Passion. It is a homogeneous group of experienced soloists.The esembles sounds more transparent and more virtuosic. "
14-04-2010 Klassieke Zaken
"The discussion about the ensemble size will always remain, but it is clear that Kuijken is very convincing with this Matthäus and his barefooted version of it. "
08-04-2010 Nederlands Dagblad
"From the first notes, it becomes clear that a strong sense of musical style is coupled with a weathered, sober interpretation of Bach's masterpiece, and that impression stays with you throughout the three SACDs"
07-04-2010 Klassieke Zaken
"Because everyone was present and concentrated from the first to the last note, it has become a unique recording, that could be very succesful.The intensity and atmosphere can be felt in the recording."
07-04-2010 Contact
"Ad in magazine of Fnac: Contact"
07-04-2010 HVT
"Recently released by Challenge Classics SuperAudio on three CDs. A beautiful, balanced, and transparent performance."
07-04-2010 CV Koers
"Sigiwald Kuijken has been experimenting for ten years with this small ensemble. He has convinced many listeners of the historical accuracy and the high artistic level of La Petite Bande"
06-04-2010 Mania Klassiek
"The persuasiveness of this approach (created by thorough research), makes the passion accessible and attractive, both for an interested layman, as the religious musician. "
31-03-2010 Klara
"With this new recording Sigiswald Kuijken and La Petite Bande show us that convincingly this approach works. Everything seems to fall beautifuly and naturally into place. The choirs and chorals are gaining expressiveness and harmonic richness."
31-03-2010 Alte Musik
"The advantage is the sleek sound and great text comprehension. "
30-03-2010 Hifi.nl
"The on three SACDs divided work sounds bright, very bright. The transparency is so present that every word and even the placement of every musician or soloist is easy to follow and to place. The minimalist setting of La Petite Bande makes the performance of Bach's work controversial. However, the performance feels comfortable and engages the listener with the lyrics. "
18-03-2010 Elsevier
"The album Matthaus Passion is not mystical. She is careful. "
18-03-2010 Luister
"Bach has such tremendous depth, that as a listener your are immediately affected. That is the spiritual quality of the music. "
17-03-2010 De Gelderlander
"How does it sound? Crystal clear and sonorous."
03-03-2010 50plussers
"For those who cannot go to a concert or who simply cannot get enough, this wonderful album of the Baroque orchestra La Petite Bande is their solution. "
22-02-2010 Opus-Klassiek
"Who is looking for a beautiful solistic Matthäus has the best deal with Kuijken for now, also looked at from an recording technique point of view. "