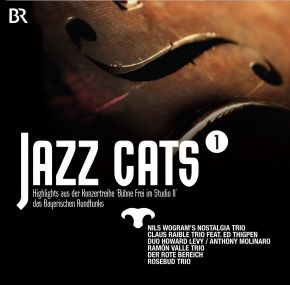 „Stage Free in Studio II“ - under this motto, which sounds a little like from days of old and actually is the title of a jazz concert series rich in tradition of Bavarian radio, jazz is celebrated in all its numerous aspects once a month in the flair of the 60s in the large studios of the Munich radio studio. You can hear exceptional talents and established big names of the regional and German jazz scenes as well as great artists from Europe, the USA and South American in the concerts. All of them are experts, who leave their own very individual stamp on the vital heterogeneity of the term jazz, which is very far-reaching in the meantime.
On the present CD, which is the beginning of a series with live recordings from the „Stage Free in Studio II“ concerts, one duo and five trio groups are presented with pieces, in which mainly the swing jazz tradition is reflected in very different ways (how should it be otherwise in jazz?). The German trombonist Nils
Wogram, for example, a deserving and innovative successor of the great Albert Mangelsdorff, bases his playing on Hard Bop and Bebop with his Nostalgia Trio, creates a very individual way of dealing with the harmonic aesthetics and the expressive range of music of the 40s and 50s and makes them into
contemporary pieces rich in history. His version of the rather rarely played Billy Strayhorn classic „A flower is a lovesome thing“ transports the poetry full of longing of compositions as well as the ambience of the era, in which it was written.
This was a time, in which the career of the drummer Ed Thigpen had also begun, which subsequently wrote jazz history with the Oscar Peterson Trio. The Munich pianist Claus Raible has already toured several times with Thigpen. They share – despite the age difference of the not negligible 37 years -
profound knowledge of the Bebop and Hardbop eras.
The harmonica player Howard Levy and the pianist Anthony Molinaro are from the country of origin of Jazz and specifically from Chicago. They dedicate themselves with a high degree of virtuosity – Levy’s spectacular playing on the diatonic harmonica is of singular quality - and as if they had been playing together all their lives to the treasures of the “Great American Songbooks” on one hand and on the other hand to their own compositions; they orientate themselves rhythmically to Latin America in “Amazonas” by Howard Levy.
The pianist Ramón Valle came namely from there. The multifaceted, multi-cultural musical heritage of his
native country and classical piano studies form the basis for his multifarious personal style as jazz pianist.
He interprets a piece of the Cuban composer Ernesto Lecuona with “La comparsa”, whose position in Cuba before Castro can be compared with that of George Gershwin and Duke Ellington in the USA.
The style of the trio “Der Rote Bereich” is also unorthodox. The bass clarinetist Rudi Mahall, guitarist Frank Mobus and the drummer Oliver Bernd Steidle play their songs in the (free) spirit of Ornette Coleman with a great deal of fun in oblique presentations and anarchic cleverness.
While the basic melancholic mood of Portuguese music forges ahead here, the Munich-based Rosebud Trio provides “comic relief” with its version of the Hank Williams country music classic “Hey, Good Lookin ́” at the end of the first “Stage Free in Studio II”. The trombonist Johannes Herrlich, the saxophonist Till Martin
and the guitarist Geoff Goodman bounce light-footedly through the well-known song, throw each other the improvised balls in high spirits, do not forget the essence of this songs, which fits so well in the repertory of jazz, film music and cowboy songs, and give the present CD a last nostalgic note in the best sense of the word.