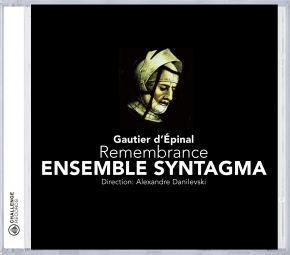 Dictionaries and encyclopaedias often mention Gautier d’Épinal in articles dealing with the music in Lotharingia. Several writers refer to an obscure mediaeval figure to whom are attributed some 15 to 30 chansons.

The researches of the Marquis of Pange a century ago have identified him as the chevalier Gautier V d’Épinal (“dominus Galterus/Walterus/Wautiers dictus miles de Espinal”), who was born between 1205 and 1230, and died in 1272. This Gautier belonged to a remarkable family that had ruled the town of Épinal from the eleventh to the fourteenth centuries.

However, Robert Lug proposes a completely different identification in his publication Der Chansonnier de Saint-Germain-des-Prés. According to Dr. Lug, Gautier was a cleric, the nephew of the Bishop of Metz. This Gautier died ca. 1232. Gautier’s writings reveal the hand of a seigneur rather than a cleric or a functionary, while the absence of compositions after 1232 is easily explained by the fragility of documentation in the hands of time and by the eternal human passion for destruction.

In any case, the traits discernible in Gautier’s biography can be attributed either to a chevalier, a cleric, or a functionary. Even his chivalrous, courtly and pragmatic Ars amatoria can be interpreted in all sorts of ways.

Contrary to the conventions of courtly literature of his time, the poetry of Gautier gives us considerable insight into his inner world. Whatever Gautier’s lot, whether he was a seigneur from humble Ruppes or a lowly cleric from Metz, the essence of the man is found in his music. As with all the trouvères, it would be dangerous to place a definitive ascription on these melodies. But the cycle associated with Gautier represents a body of work characterized by undeniable unity, cohesion and uniqueness of style.