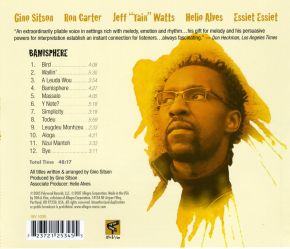 A master of the music of both the voice and the human body, Cameroon-born Gino Sitson is perhaps the most versatile vocalist in jazz today. Sitson brings a unique African rhythm and melody to this album of original compositions, with a strikingly broad range from Afro-jazz to post-bop. Guest bassist Ron Carter is nothing short of a legend, and one of the great bass players of our time. A genius with rhythm and melody, Carter has made numerous recordings for Blue Note, Elektra, Concord, and Atlantic, among others. Drummer Jeff “Tain” Watts is a percussion virtuoso who rose to prominence with the early Wynton Marsalis band. He has played and recorded with jazz icons such as Geri Allen and McCoy Tyner, and is a member of Branford Marsalis’s Tonight Show Band. Brazilian pianist helio Alves studied at the Berklee College of Music and has recorded over forty albums as a sideman, including three Grammy-winners.