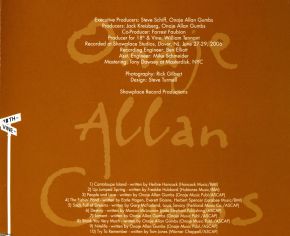 Pianist, songwriter, producer, and arranger Onaje Allan Gumbs has had a storied career, collaborating across three decades with some of the biggest names in jazz and R&B. In the 1970s, Gumbs had major collaborations with Woody Shaw and Nat Adderley. In 1985 his arrangement of “Lady in My Life” on Stanley Jordan’s album Magic Touch stayed at #1 on Billboard’s jazz charts for thirty-seven weeks! He has also worked with Woody Shaw, Betty Carter, Cassandra Wilson, Phyllis Hyman, Norman Connors, Angela Bofi ll, Sadao Watanabe, Denise Williams, Vanessa Rubin, Jeffrey Osborne, Eddie Murphy, and Gerald Albright. A native of Harlem, Gumbs has recorded critically acclaimed solo albums for MCA, Steeplechase, and Half Note. Sack Full of Dreams, recorded live in the studio, crackles with electricity. A mix of classic tunes and brilliant compositions by Onaje, the album features its title cut “Sack Full of Dreams,” first recorded by Grady Tate in 1968, and here carried by a wonderful and rich baritone vocal performance by stage star Obba Babatunde.