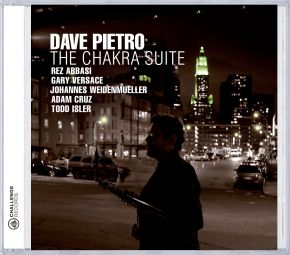 Dave Pietro Soprano, F-Mezzo, Alto & C-Melody, Saxophones, | Rez Abbasi, Acoustic, Electric and Sitar Guitars | Gary Versace, Acoustic Piano and Accordion | Johannes Weidenmueller, Acoustic Bass | Adam Cruz, Drums | Todd Isler, Percussion (Brazilian & Indian) and VocalsWith The Chakra Suite, saxophonist-composer-arranger Dave Pietro takes on the challenge of blending three profound musical influences in his life -- East Indian, Brazilian and American jazz -- into one organic whole. More than just an exercise in cleverly fusing musical elements from seemingly disparate cultures, Pietro’s vision for this project is also tied to a deeper understanding of the human body, specifically those points of energy known as chakras that help body, mind and spirit function at peak levels and transmit energy between the physical, mental and emotional levels of our consciousness.
Joining Pietro on this extraordinarily ambitious project is a like-minded crew of pianist Gary Versace, guitarist Rez Abbasi, bassist Johannes Weidenmueller, drummer Adam Cruz and percussionist Todd Isler. As the composer is quick to point out, “A big part of any project is who you choose to go on this journey with you musically. All of these guys have had some degree of experience playing Brazilian and/or Indian music in addition to jazz, so there’s a comfort level there.” Together they strike an uncommon accord on The Chakra Suite, Pietro’s sixth outing as a leader. “My conceptual intention was to use the Chakra System solely as an organizing priniciple,” Pietro wrote in the project narrative for this ambitious work, a commission from Chamber Music America’s New Works: Creation and Presentation Program. “I pondered the energies represented in each chakra, both positive and negative, and then let the muse take me. It was never my intention to create literal translations of the chakras but to compose dynamic music open to multiple interpretations and improvisations.” The resulting suite is comprised of seven separate movements, each corresponding to a different chakra and its characteristic energies.