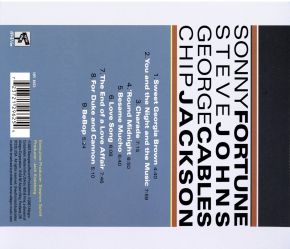 You And The Night And The Music

A truly legendary jazz saxophonist, Sonny Fortune has played with the biggest names in jazz, including Elvin Jones, McCoy Tyner, Nat Adderley, Dizzy Gillespie, Buddy Rich, and Miles Davis. Fortune has had an acclaimed recording career as a leader, including several celebrated sessions with Blue Note in the 1990s. Since Fortune first heard the record My Favorite Things in 1959, John Coltrane has been his biggest influence and primary inspiration. He, more than any saxophonist, has carried Coltrane’s torch after his death. You and the Night and the Music is Fortune’s first recording as a leader since 2003, and captures the spontaneity and thrilling energy of his recent acclaimed live dates. Pianist George Cables gained recognition during stints with Joe Henderson, Sonny Rollins, Freddie Hubbard, Dexter Gordon, and Art Blakey’s Jazz Messengers. He was Art Pepper’s favorite pianist. One of New York’s top drummers, Steve Johns has played with such luminaries as Donald Byrd, Nat Adderley, the Count Basie Orchestra, the Gil Evans Orchestra, Lou Donaldson, and many others. He was the drummer for NPR’s Billy Taylor’s Jazz at the Kennedy Center, in which he recorded seventy-fi ve shows with guests including Wynton Marsalis, Nancy Wilson, and Arturo Sandoval. Bassist Chip Jackson, based in New York, is a longtime member of the Billy Taylor Trio and performs at the Time Café with the Mingus Big Band. His style was shaped during his long association in the eighties with drummer Elvin Jones.